Kyrkos Art Gallery > About the artist 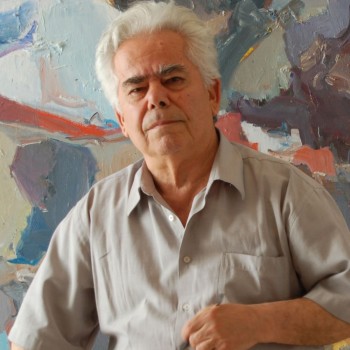 Vassilis Kyrkos was born in Neohoraki, Florina in 1942. Two decades later he was admitted in the Faculty of Fine Arts of Athens, more especially in the painting workshops. In addition, he has studied hagiography and fresco at the tutorial classes of the same institution.

In 1974 he contributed to the foundation of the Florina’s Shelter of Art-lovers, which was inspired by the ever memorable painter Sterikas Koulis. He is also a member of the Greek Chamber of Arts.

Since 1982, Vassilis Kyrkos has lived and worked in Santorini. The colours of the Aegean Sea, “filtered through the artist’s unique point of view”, have offered a significant boost to his career and have been an unfailing source of inspiration for the painter.

Every year, during the few weeks the winter lasts in the Aegean Sea, Vassilis Kyrkos is separated from Santorini and travels abroad. He gets informed of the history, the civilization and culture of countries outside Greece; New York, Egypt, France, Italy and Spain are some of the corners of the world that have a deep impact on his aesthetic criterion.

His paintings are found in private and public collections in Greece, as well as in many countries abroad.

When the people go away, I start painting their trails in the landscape. When the landscape calms down, I paint its soul, its form. I also paint the traces of Nature, of Creation itself. I paint the blue shades of Spring, the filtered purple colours of autumn, the dark colours of the volumes and the golden glances of the sun.

Too often, the image surrounding me wanes and fades after 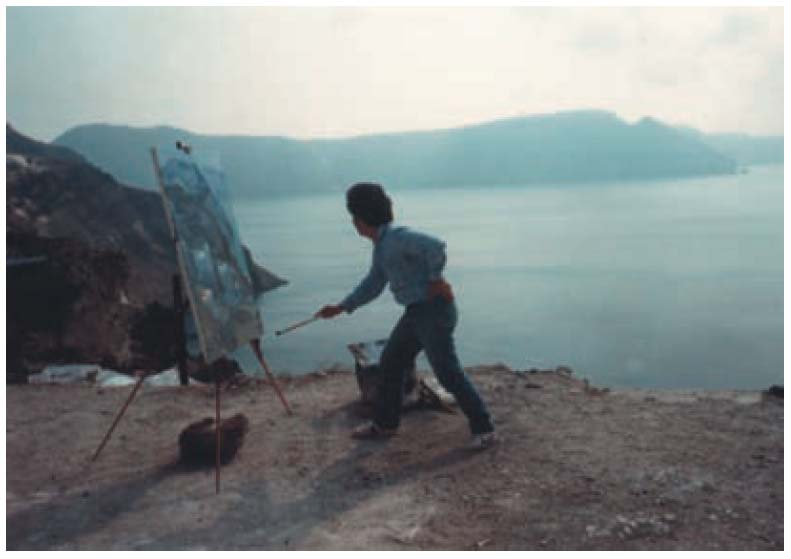 the initial startle. It leaves behind only an indelible and deep trace, which –without ever surfacing in our consciousness– marks not only the way we see, but also the way we think and act. Vertical and sharp, Santorini has become a part of Vassilis’ genetic material. He knows the underground routes of Hephaestus, he borrows the colour range and the restless form of a landscape shaken by the vibrations of an inconceivable and abstract space.

This is exactly the point where one may locate the value of such painting, which stems in the memory of the violent change of a familiar landscape to an abstract composition. It is the image of a landscape, not as it appears, but according to the painter’s perception of its essence. It is Santorini, erupting daily within the painter’s being.

Vassilis Kyrkos set out from the village of Neohoraki, close to Florina; armed with his outstanding talents, he entered the Faculty of Fine Arts in Athens. There, he studied painting under the guidance of teachers such as N. Nikolaou and G. Mavroidis, and hagiography under K. Xynopoulos. His frequent travels abroad served to enrich his creative imagery.

His early preoccupation with the depiction of friends, landscapes of his hometown, as well as other subjects in which the influence of his studies is prevalent, was followed by the formation of his characteristic expressive idiolect, after he became a permanent resident of Santorini in 1982. Since then, he has been occupied almost exclusively with the rendering of landscapes of this beautiful island with the use of a multitude of techniques and in expression of a wide variety of artistic views.

Perhaps the most captivating characteristic of Vassilis Kyrkos’ painting is that his landscapes are not photographic images of Santorini; despite their common starting point, inspiration renders each painting an independently constructed work of art, free of references to the actual landscape. Sometimes expressionistic, yet other times minimal (especially as regards his watercolours), using colours which pertain to the deep blue of the Aegean Sea, the striking white of the houses, the earthy hues of the cliffs or the blazing sunset, Kyrkos takes us to a Santorini unrecognisable by tourists. This is a magic land deeply engraved in the experience of the artist himself, reconstructed in the artist’s own personal style and eloquently honoured by his paintbrushes.

Vassilis Kyrkos from the village of Neohoraki chose to study art during a time of mass departure in fulfilment of dreams of immigration. His entry to the Faculty of Fine Arts in Athens as a special talent enriched the circle of plastic artists living in the provinces and became the link with the next generation of artists, which originated in the provinces but was formed in the educational centre of Athens. There, Kyrkos chose to become politically active, in utilisation of the energy and multitude of voices available in the centre. Following the restoration of the democracy, Kyrkos decided to support the vision he shared with the Florina’s Shelter of Art-lovers.

Vassilis Kyrkos became an active artistic presence in the first years after the reinstitution of democracy in Greece; for our region, this period had had a marked effect on social and political functions. With its significant development from the time of post-war self-taught painters to the Fine Arts’ students in the sixties, individual artistic creation became activated in an era of volatility and redefinition, under the prevalence of political characteristics which were locally expressed by the establishment of the Florina’s Shelter of Art-lovers, in 1975.

Any cookies that may not be particularly necessary for the website to function and is used specifically to collect user personal data via analytics, ads, other embedded contents are termed as non-necessary cookies. It is mandatory to procure user consent prior to running these cookies on your website.